"That's just not your custom," the Arbore often said to me, helping me get over numerous embarrassments. They are cultural relativists from the bottom of their hearts.

In each of the four Arbore villages, people live together in clans. The huts of each clan are arranged like a horseshoe around the central village square. The entrances of the huts are directed to the periphery, the backs to the village square. All hut openings of a clan point in one and the same direction, namely the one from which it once came to Arbore.

Even though the Arbore consider themselves as a single entity sharing the same living conditions, rites and moral codices, they also see themselves as a multi-ethnic society.

On the right in the horseshoe there stands the hut of the clan chief. Right means authority, power and strength. This hierarchy - right over left - is an aspect of their social order. The husbands have their place on the right side in front of the hut, the wives sit on the left side next to the hut entrance. This is how guests are welcomed. Inside as well as outside. Even at celebrations, such as weddings, the men sit on the right side of the hut, the women on the left. 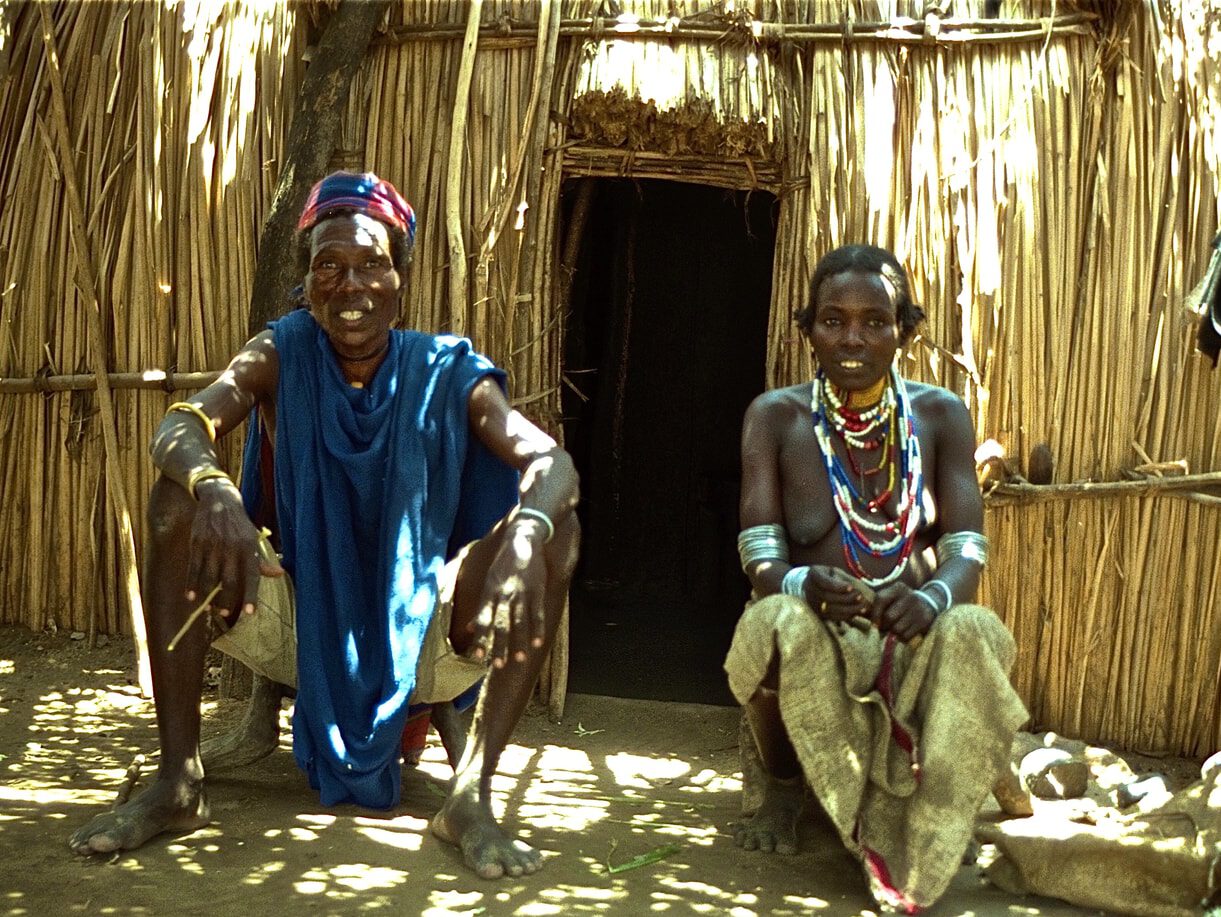 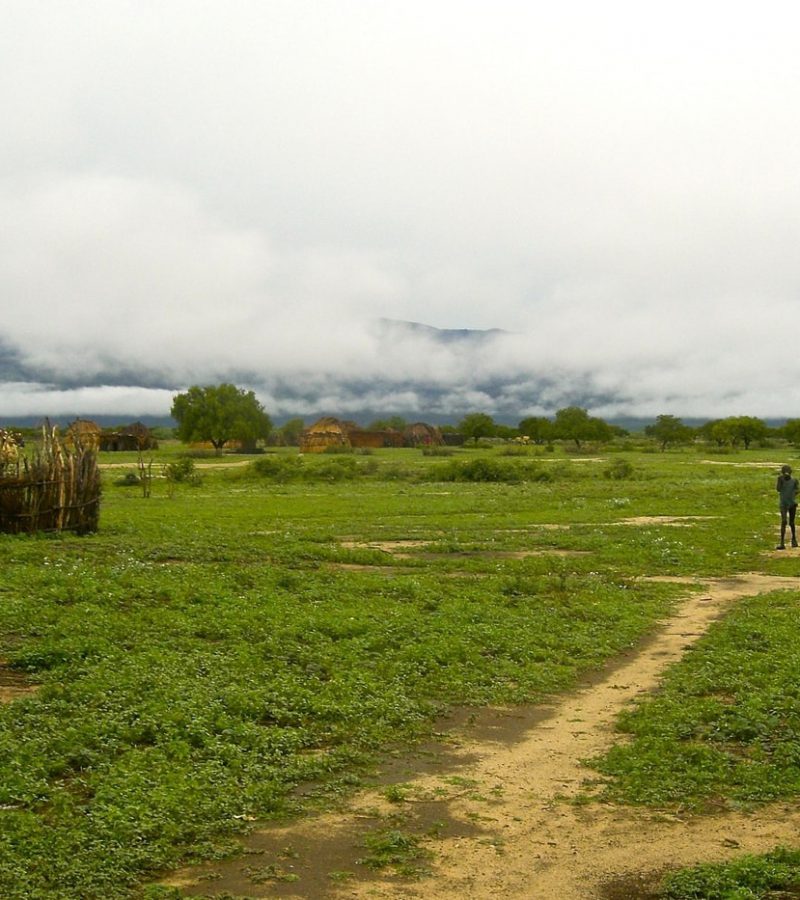 Each Arbore village has a central village square, the nab. Even if all the huts have their backs to the nab, it is the center of attention. This is where the dances of the unmarried take place, where the first friendships between boys and girls are formed. When an Arbore has something important to discuss with another clan, he goes across the square rather than around the outside of the village. And also every adult who arrives newly in the village, every stranger who has no family here and wants to stay, has to set up his temporary hut on the nab for weeks and months.

Everyone who walks, dances or lives here is observed and evaluated by the Arbore. It is a place of vigilance, open mindedness and honesty. Everyone who stays here shows his good intentions or has to prove that he really has these same ones.

All paths across the nab and also around the village are precisely defined. Nobody just traipses across here. Paths through partly imaginary gates are used.

Blood is called diik in Arbore. It is a source of strength, sometimes even sweet. It is never neutral and seems to separate relations. It separates blood relatives from other neighbors, separates enemies from friends, separates men from women. The relationship to sweet blood, diika makka, is ambivalent. It is something that is desirable. One wants to possess it (women). And one wants and may flow it violently (killing defined enemies). The Arbore proverb "Marriage is like a fight" is an evidence of this ambivalence.

The blood of the herd: In everyday life, cattle serve as a source of milk and blood as well. To obtain the blood, the carotid artery of a strong cow is scratched with an arrow shot, the blood is collected in a bowl, mixed with milk and drunk. Drinking the blood brings physical strength and strong emotions up to trance-like mental states.

The blood of neighbors: Neighbors have sweet or bad blood. The Arbore say: The blood of enemies is sweet. Neighbors with sweet blood are usually those who have no common ancestry myth with the Arbore. Killing them brings strength and fertility to the Arbore.

Women's blood: In Hayward (1984), menstruation is defined as ture, dirty thing. To me was also given the description eel wannit, source of women. This definition carries within it positive characteristics such as fertility and origin of life. During menstruation, sexual contact is taboo. 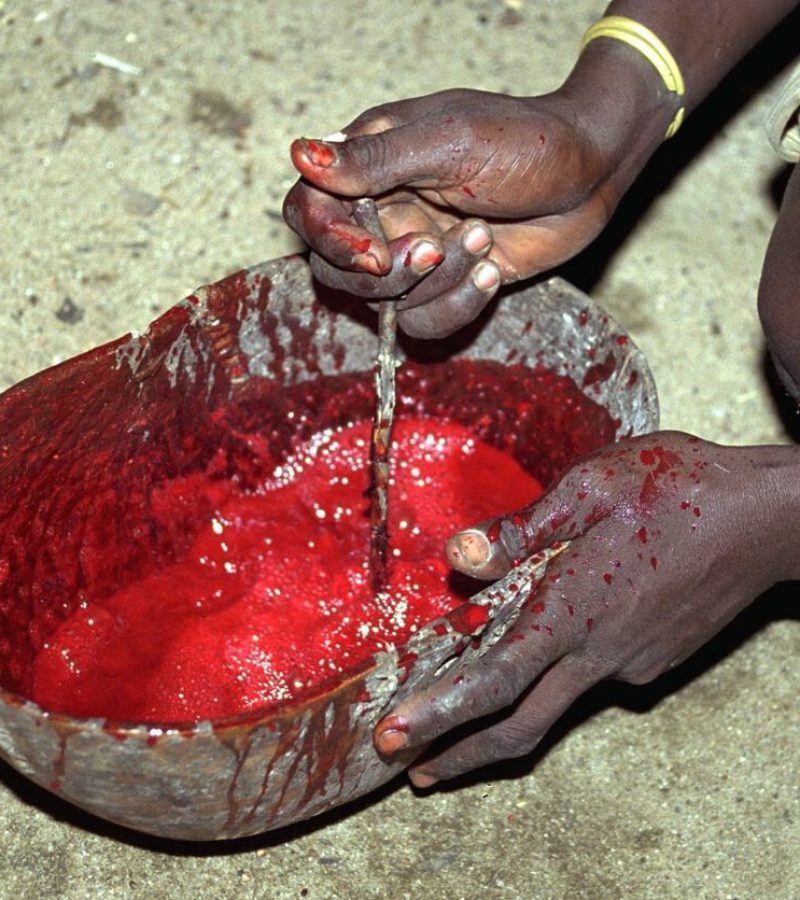 From disco to standards and ghost dance - dances are as common as they are special in Arbore. The choreography is always prescribed. Not unusually, they are used to break taboos and reverse rules. This is approved and part of the regular or the ritual.

At the night dance, the unmarried meet on the village square. Through short touches with the fingertips or playing hash, first tendernesses are frankly exchanged. There are precentors and pre-dancers. Often the girls wish for a certain dance from the boys. The clapping of hands and rattling of anklets set the rhythm.

The wedding dances are strongly ritualized. The married women from the bride's clan bid her farewell. They come running with sticks and threaten the new clan to handle their child well. The dances of the two clans are decidedly lewd. The hips are swayed and pressed against each other.

The dances at a funeral are monotonous and slow, appropriate to the occasion as well as the status and age of the dancers. The clansmen of the deceased dance together in an eternal spiral. They bid farewell to the dead person, who is taken from their circle forever.

When the drums sound at night, the ayyan comes. The spirit slips into some bodies and makes the person speak with a foreign tongue. Many fall into a trance through hyperventilation, heat as well as alcohol and caffeine do the rest. The bystanders sing and clap. The ayyan greets the participants and asks them to dance with him. He babbles, sings and drinks. The next morning, he or she usually has no voice.